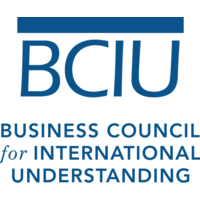 The Business Council for International Understanding (BCIU) is a nonpartisan, U.S.-based organization that works to expand international trade and commerce. It does this by helping its member companies engage internationally and by facilitating mutually beneficial relationships between business and government leaders worldwide.

Founded as a White House initiative by President Dwight D. Eisenhower, BCIU has a long trusted relationship with the U.S. government, and over the years has built strong relationships with many foreign governments and multilateral agencies. The organization skillfully leverages its global knowledge and broad network of business and government contacts to facilitate dialogue and initiatives that expand international commerce and encourage economic development worldwide. BCIU has organized thousands of conferences, roundtable discussions and private meetings, as well as trade missions around the world, each reflecting the organization's deep understanding of business and economic policy issues and its commitment to encouraging dialogue among the participants.

BCIU also offers a range of programs and services to both businesses and governments, including specialized training on commercial diplomacy for executives and trade facilitation officials from U.S. and foreign government agencies. As a certified U.S. government contractor, BCIU also designs, implements, markets and manages trade visits, conferences and training programs for private and public sector leaders from developing and middle-income countries, and it works with foreign governments on a contract basis to facilitate programs such as commercial development tours and trade missions.

As a member-driven organization, BCIU is governed by a volunteer board of directors comprised of senior executives from approximately 40 leading companies. In addition to its New York headquarters, it maintains offices in Washington D.C. and London, and a network of global advisors.